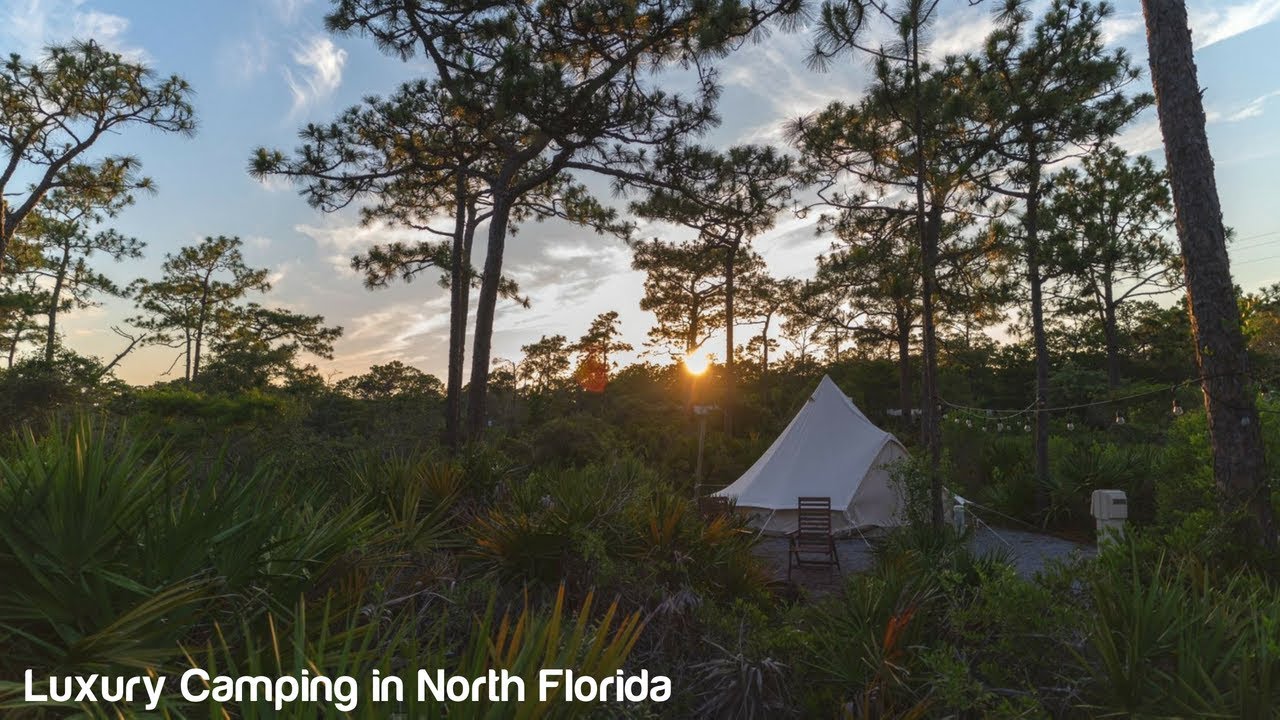 Have you ever been lying on your beach blanket, watching the sun set and the first stars come out, and dreamed about spending the night right there on the beach?

You can make your dream a reality, because there are more than 900 campgrounds in Florida with more than 100,000 campsites. Some of the best and most popular campgrounds are located at the beach.

Most beach campsites are located in the slightly sheltered area behind the sand dunes. Camping right out on the beach near the waves is not usually permitted for safety reasons and to protect wildlife like sea turtles and nesting birds.

The season and your choice of shelter both play a big part in choosing your beach campground. Tent campers are more sensitive to weather conditions than RV campers who have access to heaters and air-conditioning. Some campgrounds cater more to RV campers than to tent campers, but Florida State park campgrounds generally make room for both.

Lush coconut palms against a backdrop of white sand and clear tropical waters make this Bahia Honda State Park's campground one of the most popular in the state.

South Florida and the Keys

During the winter months, south Florida and the Florida Keys are in high demand with campers. Humidity is lower, breezes are refreshing, and bugs are at a minimum. Florida Keys beaches tend to have water that’s clear and shallow, making it more suitable for wading than for swimming. A mask and snorkel are musts, because the waters are filled with beautiful live shells, fish, grasses, and other interesting marine life.

For travelers’ convenience, the Overseas Highway has a series of mile markers on the roadside indicating the distance to Key West, located at mile marker zero. Mile-markers are often used when giving directions.

Located at mile marker 67.5 on Long Key, this campground offers 60 campsites right on the Atlantic Ocean, both for tents and RV's. The island and beach are narrow, but the water is absolutely gorgeous. The offshore coral reefs block the open ocean swells, resulting in calm, shallow water.

Located at mile marker 56.2 on Little Crawl Key, the Park offers 28 campsites situated only about 100 feet from the Atlantic Ocean. The 1,200-foot, sandy beach is perfect for sunbathing, launching a kayak or building sandcastles.

Located at mile marker 37, Bahia Honda is one of the most scenic parks in Florida. Lush coconut palms against a backdrop of white sand and clear tropical waters make this Park's campground one of the most popular in the state. And its beaches are widely considered the best in the Florida Keys. Three campgrounds with a total of 80 campsites cater to both tents and RV’s.
Three duplex cabins are also available if you don't want to rough-it.

You can discover this undeveloped, scenic group of islands close to the booming city of Miami. Although most of the park is underwater, there are two islands of note – Elliott Key and Boca Chita Key – where Florida beach camping is permitted. There are no cars, roads or bridges to these islands, so you'll either need your own boat or you'll have to arrange transportation. You can arrange transportation with Biscayne Underwater Park. Elliott Key is the larger island and is forested with tropical hardwoods. It features flush toilets, cold showers and drinking water. Boca Chita Key has saltwater flush toilets, but no fresh water on the island. Camping on these sub-tropical islands is for experienced campers. Mosquitoes and no-see-ums can sometimes be an issue, especially during the summer months. The beaches are small and tend to be rocky, but if you want to get away from it all in a beautiful place -- and especially if you like fishing and snorkeling-- this is the ticket.

Thanks to the park, you can camp at the most famous surfing spot in Florida, located right off A1A. Even if you're not a surfer, it's fun to watch them riding some of the best waves in the state. The camping area isn't right on the beach, but it's close enough. The park spans both sides of Sebastian Inlet. The jetty, popular with fishermen and surfers, is on the north side of the inlet; the camping area is on the south side. With three miles of beautiful beaches, a boat ramp, and the Indian River Lagoon for canoeing, kayaking, and fishing, you'll never run out of things to do.

You can camp right on the beach in this pristine paradise, from November through April. The campsites are a quarter-mile walk from the parking area, and there are restrooms within walking distance of the campsites. The park boasts 24 miles of undeveloped Atlantic beach and only two beach camping areas – one accommodates six people, and the other 15 – so don't expect a crowd. Fires are allowed in metal containers, except during dry periods. If you really want to get away from it all, this place is guaranteed to soothe your soul.

Located at Flagler Beach, the Recreation Area boasts Florida beach camping at its finest. The 34 sites are just behind the dunes, so close to the water that you can hear the melody of the surf, and all offer electricity and water. Shade is scarce, but the almost-constant sea breeze will keep you cool and chase away bugs.

Located along the serene Atlantic Ocean coast in St. Augustine, this resort offers a variety of outdoor activities to enjoy while camping between the Ocean and the North River.

Other campgrounds on Florida's Atlantic Coast that get you close to the beach:

Known for placid Gulf waters, white sand beaches and abundant bird life, the central and lower Gulf coast features some stellar beach camping in Florida. Your options include discovering a remote island accessible only by boat, or kicking back in a full-service campground within minutes of downtown St. Petersburg.

There’s hardly an award this Park hasn’t won. Dr. Beach chose it as the number one beach in the nation in 2005, in 2011 it was named America’s best family beach by the editors of Parents, and TripAdvisor named it America’s Top Beach in 2009. Its beautiful campground is also noteworthy. Many of its campsites are situated on the calm backwater, with the beach just a short drive or paddle away. Mature trees provide thick shade over most of the campsites, and the breeze coming off the water is heavenly. Both tents and RV’s are accommodated and the sites have electricity and water. The Park also offers bike and kayak rentals, two fishing piers and a historical fort.

Since there are no roads or bridges to this island, the Tropic Star ferries passengers to Cayo Costa State Park daily, leaving from Bokeelia on Pine Island. La Costa Island is a fairly large and mostly undeveloped island between North Captiva and Boca Grande. The camping area is right behind the small dunes and just steps from a fantastic crescent-shaped beach. Bring lots of batteries for your camera because you won't be able to stop taking pictures. Several six-person cabins are also available. None of the sites have electricity or water. Showers and flush toilets are available, as is drinking water. You may find that you have the beach practically all to yourself.

Want to step right out of your tent or RV onto a white-sand beach? Located on Fort Myers Beach, this palm fringed Resort caters to RV’s. Many campers return to its shores year after year, forming a little beach community. It's close to all the conveniences of Fort Myers Beach and is on a trolley stop. It's also close to traffic noise. If you don't have an RV, there are rentals available.

The summer months bring campers to the pure white sand and clear emerald green waters of Northwest Florida's beaches, which may be a bit cool during the winter months for beach camping. Campgrounds in this part of the state are busiest from March through August and on holiday weekends. Where south Florida has palms, northwest Florida has pine trees—lots and lots of pine trees. This is one of the quietest and least developed areas in the state and it is a pleasure to drive along Highway 98, which closely parallels the coast.

The Pensacola area is home to Johnson Beach, part of Gulf Islands National Seashore on Perdido Key.
It offers primitive camping, with some minor sand-hiking, on its far eastern edge. Sugar-white sand, rolling sand dunes and wetlands make up the landscape of this peaceful camping destination.

Just across the bridge from Perdido Key, Big Lagoon separates the mainland from Perdido Key and the Gulf of Mexico. It boasts 655 acres, including beaches, shallow bays, nature trails and open woodlands. The park is a haven for nature lovers, and offers kayaking, hiking, fishing, birding and more. Its 75 camping spots are equipped with water and electricity, and accommodate both RV’s and tents.

Here's another of Pensacola’s delectable beach offerings. Part of the Gulf Islands National Seashore, on the west end of Pensacola Beach, it features a historic fort. It also boasts miles of sugar-sand beach – and its camping locations are located just across the street from it. Its 200 camping sites include tent camping and RV camping areas for RV’s up to 50 feet. The sites include water, electricity and picnic tables.

Just offshore from Apalachicola, you’ll find St. George Island, home to a magnificent state park. If nine miles of white-sand beaches sounds tempting to you, consider reserving one of its 60 campsites. The campsites, located between the Bay and Gulf, are about a half-mile from the beach. They’re nestled under a canopy of pines, and offer electric, water and a central dump station. The park also offers primitive camping and a group camp area. The primitive camp is located at the end of a two-and-a-half mile trail, and is also accessible by canoe or kayak. There are no facilities or water at the primitive camp, while the group camp is designed for organized groups and offers a restroom and cold showers. Fishing and shelling are exceptional at the park. With a special permit and an additional fee, fishermen can access East Pass. Common catches from the beach or bay include redfish, mackerel, trout, whiting, flounder and more.

This campsite on the Emerald Coast is directly on the bay, and just across the street from the white sands of the Gulf of Mexico. It’s convenient to restaurants, entertainment and more.

This Destin site offers an assortment of RV sites - from open beachfront sites with a view of the Gulf to tree shaded, grassy sites. Every RV Site is within walking distance to the Gulf of Mexico's emerald hued waters.

Located half way between Pensacola and Destin on Santa Rosa Sound, this is one of the closest RV Parks to the Gulf.

St. Andrews is at the east end of Panama City Beach. At any one of the 176 campsites, you can get away from it all without being too far away.

Located roughly halfway between Panama City Beach and Destin, south of U.S. Highway 98, this park is a quiet respite that encompasses an award-winning beach. Its campground scores high marks for privacy between campsites and most are easy on the eyes: some campsites even overlook a lake.
Cabins are available as well.

Campers who plan ahead are happy campers.

Campers who plan ahead are happy campers.

Making reservations is a must. During the slower times of the year (winter in northwest Florida, and summer in the rest of the state), you may be able to get by without reservations on weekdays, but it’s better not to take the chance.

And to snag a campsite during the busy season and on all weekends and holidays, you'll need to make reservations months in advance. 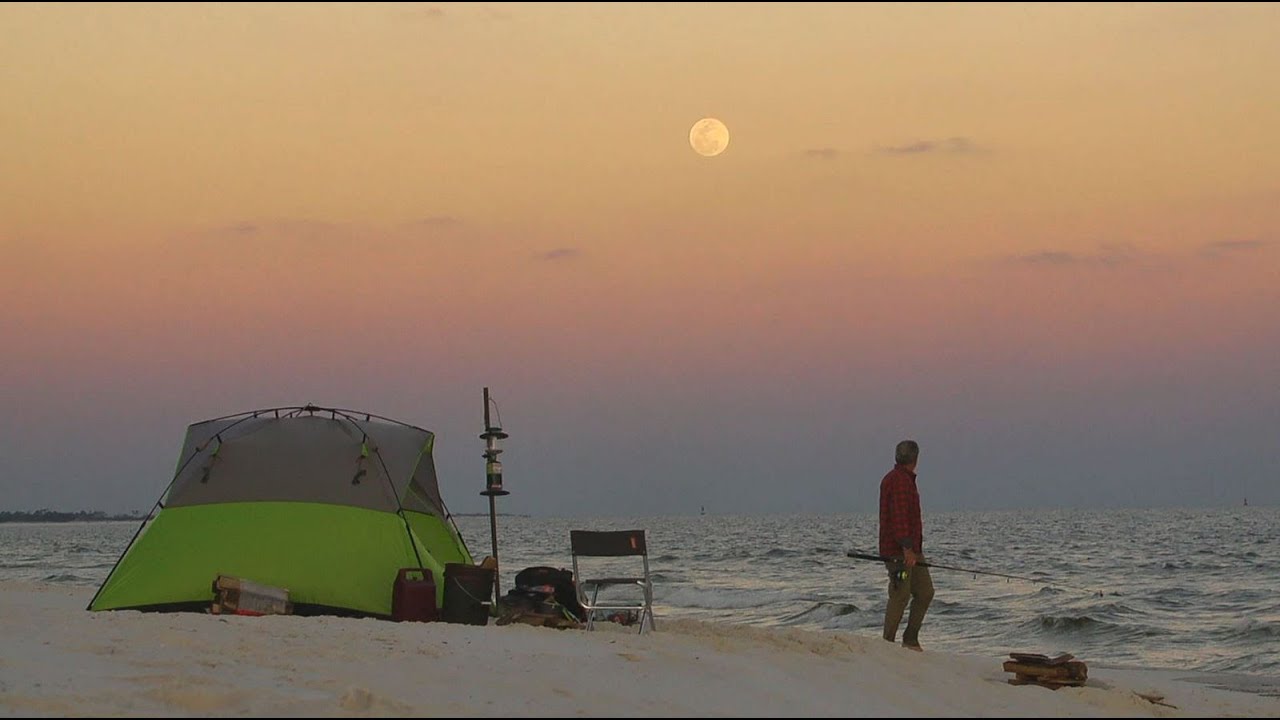